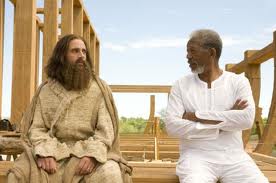 Here’s this Evan-guy, who Morgan Freeman raises up to be a leader, to lead something that is way bigger than he is.

Tonight, for two hours, it was entertainment;
4000 years ago, it was reality.
After I left the theater, I was able to come home, open up my bible to Genesis 6 and see for myself that this wasn’t just a manuscript or a screenwriting.
This was the truth.
God really raised up a leader named Noah.
God really did use Noah to lead something way bigger than Noah was.
And Noah did it.
How about you?
Where are you being Noah?
And what ark has God led you to build?
Seems like God did this often, eh?
He raises up leaders and gives them a mission way beyond themselves.
(Moses, Noah, Mary, Paul)
And before they were biblical, timeless heroes,
they were straight-up, real people, like you, reading this.
If they could accomplish the mission God led them to lead,
SO
CAN
YOU!