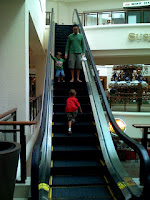 Today, we went to the mall to  take a pic with Santa. This is not the pic I expected to snap! In this pic, some would see two people doing somethingnormal; one doing something abnormal. Some would see two people doing something common; one of them doing something different.If I had to describe this pic, I’d say it’s the analogy of my life and if I gave it a caption, it’d say, “She’s always the one going up, while the world’s been coming down.” I’ve always been different.I don’t have experience or awareness with things like “of the crowd,” “in the majority,” or “of the popular vote.” Though, admittedly, there’s been times where I wish I did.Straight up, it’s something I still wrestle God on and talk to God about, ’cause I just can’t figure it out. Sometimes I discover things in others before I’ve answered them within myself. That’s exactly what happened with this moment. I discovered that DJ is different. And maybe I don’t have all my different-ness figured out yet, I do have one thing figured out…I’m always gonna be there to help DJ with his. I would dare say that those going up the escalator while the world’s coming down are a minority-piece of the public pie. But if you’re one of ’em, let DJ and I know. We’ll take the escalator together…going up. : )