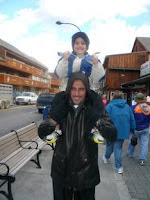 Tonight, after dinner, DJ hopped up on Raul’s lap & had some questions:“So that person (satan) isn’t a monster, is he?”
“What does the bad-angel (satan) do to people when they go there (hell)? “Why did someone kill the dark man (MLK Jr.)?
“If they shot him because he was dark…will they shoot you because you are brown?”
“Where did the man go who killed the dark man (MLK Jr.)?I share this because it’s cute, but I think it’s also something else…a sincere exchange between a godly one and a seeking one.
And maybe in our “big-people” world, others are thinking the same things….they just aren’t asking ’em.