The Parable of the Dolphin 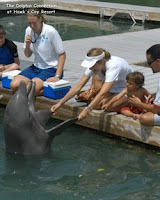 A few years ago, we signed up for a private encounter at a dolphin cove.  The trainer shared that “the dolphins don’t leave the cove, but on a few occasions when they got out, all they wanted to do was get back in.” Based on my observation, I wouldn’t question that for a minute. The adoration between the dolphins and the trainers was unequivocally the same–trust and love went both ways.  I understood why the dolphins would inadvertently and passively get out, but would aggressively assert themselves to get back in.  This is the picture Jesus paints for us regarding heaven. In the bible, Jesus doesn’t speculate on heaven, He testifies to it because He’s been there. And He only wants to see us there.  He came so we could have heaven; He died so we could have heaven; He resurrected so we could have Heaven. On this globe, I have intentionally and unintentionally found myself outside of God’s cove. Either way, I desperately wanted to find my way back in. The neat thing about going to Heaven is we’ll never end up on the outside of it.  But the question that longs to be answered is: are you getting yourself ready, down here? Oh, sure, you may be a grrrrrrrrrrrrrrreat Christian, but what area of your life are you swimming to close to the outside of His cove?  I don’t usually end with a question, but today, let’s wrestle with this one!